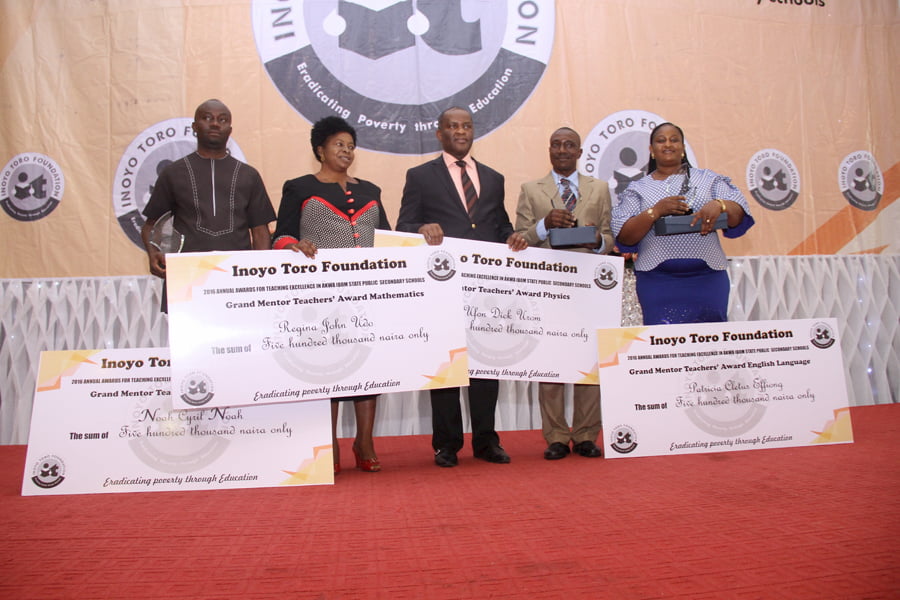 The Inoyo Toro Foundation held its 9th annual awards for Teaching Excellence on the 4th of November 2016. This year, a total of 360 students from 60 schools in Akwa Ibom State received mentorship from successful entrepreneurs, professionals and captains of Industries across different spheres of human endeavours.

After almost a decade of consistent hosting of the event, the benefits of the program have gone beyond mere guidance and counselling and has fostered robust interface between schools and their regulatory agencies as well as provide a social platform hitherto non-existent for many teachers and students to interact, thus improving the self-confidence of participants.

The Guest Speaker’s speech is usually the highlight of our annual event. This year’s was no exception. It was delivered essentially in an extempore manner by a reputable captain of the oil and gas industry, Mr. Phillip Iheanacho, MD and CEO of Seven Energy, who held the audience spellbound. Taking the audience down memory lane to his days as a student with all the dreams for a brighter future, fighting against many odds, the Harvard trained lawyer, inspired not a few of the students and invitees who were in attendance. Central to his message was the importance of education to the well being of the individual. It was captured at the end of his speech where he stated that students should do all they can to get an education, except stealing.

His Excellency, Mr. Moses Ekpo, the Deputy Governor of Akwa Ibom State was on hand to grace the occasion. His brief and well delivered speech was meant to encourage teachers and students to strive towards hard work and be persistent in their quest at improving educational standards and uplifting themselves. He said he was further impressed with the Foundation for finding it worthy to address the fundamental questions in our educational system, by stimulating positive and healthy competition among schools as a means of engendering excellence in the system.

The seeds for a new vista in the annual awards were sown in the course of the speech of the Chairman on the occasion, Mr. Edo Ukpong, a seasoned legal practitioner, who described the awards as laudable because “As human beings, we all love to and deserve to be appreciated for any progressive contribution we make”. He announced his sponsorship of a new award category to celebrate principals of schools who have distinguished themselves in school administration. The award is being instituted in memory of his Father, a one-time history teacher and Principal at Hope Waddell Training Institution, Calabar, and Nigeria Military School Zaria. He was a former Deputy Commandant Nigeria Military School, and Assistant Director of Army Education Corps. Central to his speech, he emphasized the need for students to take their education seriously and tasked teachers to continually strive for excellence in the discharge of their teaching duties.

The process of screening teachers for the 2016 awards was as standardised as it has been in previous years. Anchored by a panel of reputable scholars from the University of Uyo, the process puts in place multiple layers that ensure that only the best teachers are chosen for the awards. Dr Enobong Joshua of the University of Uyo heads the screening panel and provided a summary of the various stages involved in coming to the decision regarding the qualification of those awarded Mentors and Grand Mentors’ prizes in the various categories. Amongst other requirements, prospective candidates for awards are screened in two parts.

The first part is an aptitude test for 40 mins based on the WAEC/NECO curriculum. The second part is as oral examination meant for those who pass reasonably well in the written test. To strengthen excellence in the awards, first, second and third prizes can only be merited if the contestant scores at least 70%, 60% and 50% respectively in the final results. This explains the absence of winners in some categories in some of the yearly awards. The Grand Mentor Teachers’ Award challenges past winners to produce their kind through regular mentoring of other teachers in their subject areas who may reside within their vicinity. The award attracts a cash prize of N500, 000.00.

With the consistent improvement in successive years of the award ceremonies, next year’s event, which will coincide with its 10th anniversary, promises to be very rich and colourful. It will hold on Friday, the 3rd of November 2017. All lovers of education who are willing to give back to society through education and contribute to the systematic and sustainable process of eradicating poverty are invited to attend.